(An attempt at) A Short Bio

I was the first-born in what would end up being a family of six children.  My parents lived in Southern California at the time of my birth, which happened in Santa Ana.  We moved around a lot when I was growing up and particularly between California and Texas in my younger years.  We lived in Baytown and Deer Park, Texas.  We also lived in Lone Pine; Westminster; Midway City; Garden Grove; and Norco, California - just to name a few of the California cities.  The longest stint that I remember was again in Santa Ana from the time I was nine until I was fifteen, which is when we moved to Norco.  I lived in Norco until about midway through my senior year of high school, at which time my parents divorced and I was sent to Needville, Texas to live with an aunt and uncle and finish high school.  I graduated from Needville Sr. High in May of 1978 and attended a whole semester at Wharton County Jr. College in Wharton, Texas, majoring in Agriculture and minoring in music.  My aspirations were to return to Needville High as an Ag teacher and do something with music on the side.  Neither of those things happened.  I dropped out of college as a result of some family turmoil, and shortly thereafter returned to Southern California to live and work with my mother in Huntington Beach.  Over the span of the next couple of decades my life would be full of drama and turmoil, and I'll share more about that in my testimony.  As an adult, I moved back and forth between Texas and California several times.  I was extremely co-dependent and was not much more able to put down roots than my father had been.  When the dust finally settled, however, I was in Northern California - married with three children.  Two years later, I was blessed with my fourth child at the age of thirty-six and the next small children I would have in my home would be grandchildren.  I have been married to the man of my dreams for almost twenty-four years(in just a few days, actually).  We have four children and six grandchildren - all gorgeous!  My oldest is thirty-seven and my youngest is eleven (we adopted one of our grandchildren).  I have one adult boy still at home and preparing for the mission field (a former history major at Southwestern University) while his younger brother is attending West Texas A&M University.  It seems I'm still going back and forth between California and Texas though.  My husband and I lived in Northern California together for fourteen years, then eleven years ago we moved to Central Texas.  It's kind of ironic, because my husband was born in Texas and lived in the same Northern California town we met in for all but three months of his life before we moved.  His parents are originally from Austin, but moved to California when he was three months old.  I always thought I wanted to marry a Texan and we joke about how I had to go to California to find him. 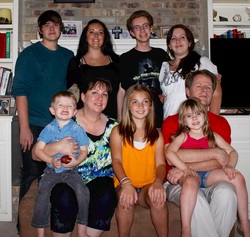 This is all of us taken when my oldest son graduated high school is 2012 (It's the only picture I have of all of us together.  (Standing L to R) Matt (now 21 and attending college); Michelle (mother of Lissy, lives in California); Joshua (the graduate who went on to attend Southwestern University in Georgetown); and Shauna (mother of Leah and J.J., lives in Austin).  :-)  (Seated L to R) J.J. (now 8); Me; Lissy (now 17);; My husband Rich with Leah (now 11) in his lap.  We also have a rescue California Spangled European Short-Hair tom-cat named Kharjo.  I am very blessed!

No Longer a Captive - my salvation testimony (as shared at New Life Church, Alamo, CA., November, 2004)

A Testimony of Healing

Wednesday, March 9, 2005 - the day my family and I call "The Day of Freedom".  Freedom from the debilitating disease known as Fibromyalgia.  I had suffered with it for nine years, but until 2003, didn't know what it was called.  Back then it was not as well known as it is now, and I was told there was no cure and no medication.  Apparently that doctor didn't know about The Cure for ALL ailments.
I was attending a "Believing God" by Beth Moore Bible study at my home church, New Life Church in Alamo, California.  Before the study ever started, God was speaking to me about great things He was going to do during that time.  I believed He was going to deal with my doubts about supernatural healing and I was going to see someone healed.  My youngest sister was battling thyroid cancer at the time, so I thought it would be her.  I was mistaken.
As I stood in my bedroom getting dressed for the day, I suddenly felt a strong desire to worship God.  The Holy Spirit was all over me like a blanket.  I began to worship and next thing I knew I was on the floor wailing.  I felt like chains were falling off of my body.  I was crying, laughing, and praising God all at the same time....very loudly.  My sons came running in thinking someone had died.  It was the most amazing thing I'd experienced since I received my prayer language.  I was shaking, I was so overtaken.  I knew right away what had happened and I was astonished.  I felt so light and free, I could've taken off flying.  I believe I WAS flying, spiritually.  My boys were so excited and they are the ones who came up with "The Day of Freedom".  I called my husband, my pastor's wife, everyone I could think of.  That night at Bible study, I shared with my sisters-in-Christ what He had done for me.  He turned a skeptic into a believer.
I never doubted God's ability to heal, I just doubted His willingness.  Too many times I'd seen sick people being prayed for and not getting better.  Too many times I had prayed for someone who never got better.  What I failed to understand was that God always heals, just not always the way we expect or want Him to.  My experience taught me that God heals in His time and for His purposes and glory, and sometimes the healing takes place in glory.  Our job is to trust Him.  My trust in God grew tremendously that spring day in 2005, and I pray it continues to grow as I seek to know Him more intimately, from glory to glory, until the ultimate day of freedom when I am free from all the chains of this world.  Hallelujah!